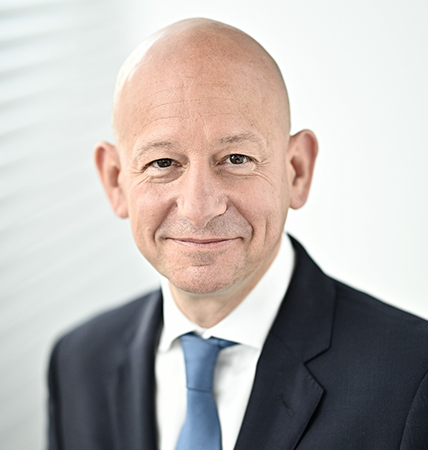 Christophe Bruneau started his career in 1992 with Armines Transvalor as head of the Industrial Marketing and Commercialization department. The following year he was named European Affairs Officer for this group. He then joined the French embassy in Bonn in 1995, as Science and Technology Advisor and Coordinator of Aerospace Affairs. In 1999, he was named director of space business with MAN Technologie AG in Augsburg.

Christophe Bruneau joined Safran in 2004 as deputy to the Executive Vice President in charge of the Space Engines division at Safran Aircraft Engines (Snecma at the time), based in France and Germany. In 2007 he was placed in charge of the TP400 turboprop program within the Europrop International (EPI GmbH) consortium in Madrid. After the certification of this engine for the A400M military transport, in 2011 he oversaw the creation of AES GmbH, a 50/50 joint company between Safran Electronics & Defense and MTU Aero Engines based in Munich. He was named CEO of this company in 2012. In September 2016, he was named CEO of EPI GmbH in Munich. In January 2020, he was appointed Vice President Military engines of Safran Aircraft Engines.

As Vice President in charge of Safran Aircraft Engines’ Military Engines division, Christophe Bruneau is responsible for military engine production and support, especially the M88 fighter engine in export markets. He is also in charge of coordinating Research & Technology work on the engine that will power the new-generation fighter in Europe’s Future Combat Air System (FCAS).

Christophe Bruneau, 52, graduated from INSEEC in 1992, and attended a Post-Graduate program at Ecole Centrale Paris engineering school in 1993.