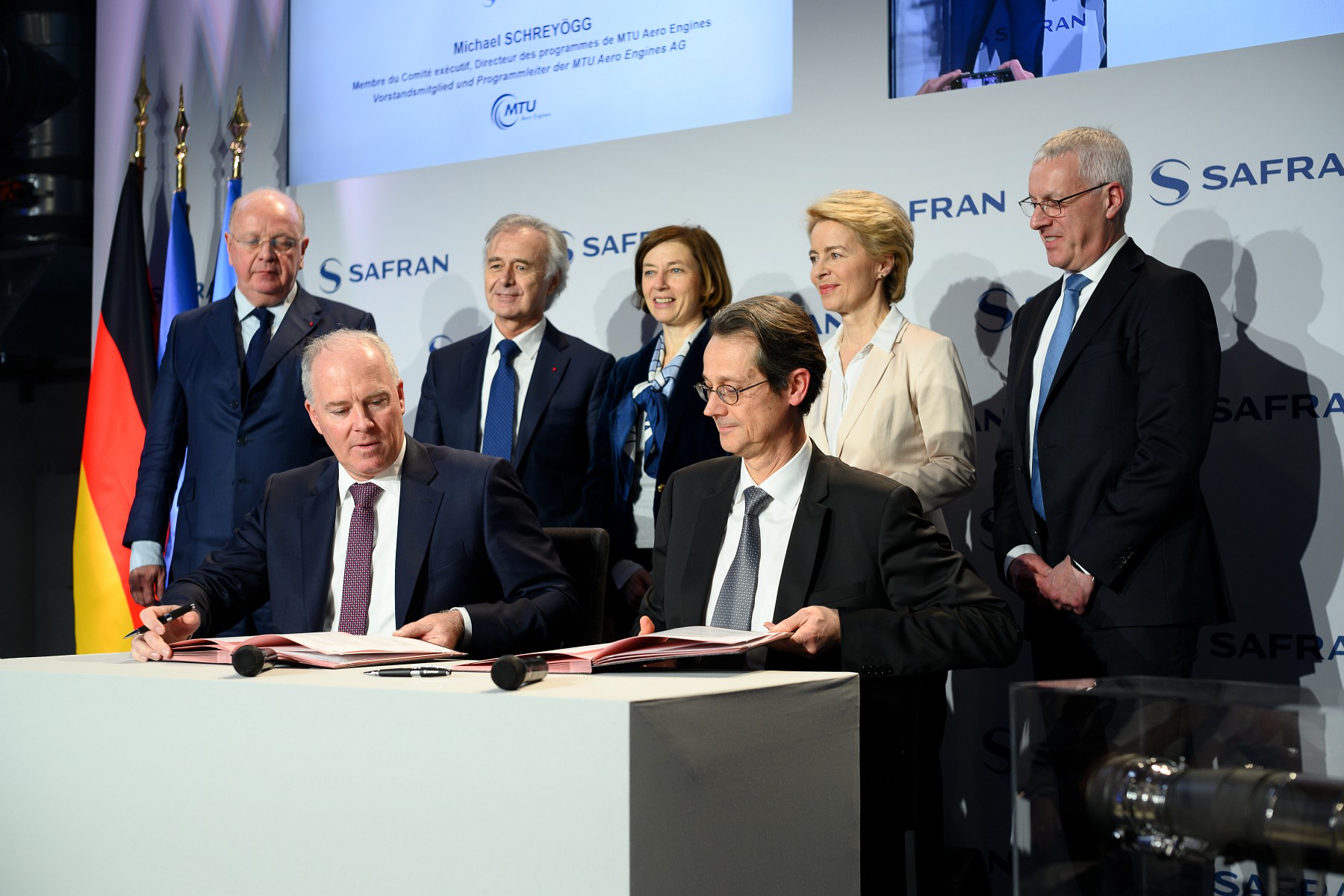 In the presence of the French and German Ministers of Defense, respectively Florence Parly and Ursula von der Leyen, Safran and MTU Aero Engines today officially announced their partnership to jointly lead the development, the production and the after-sales support activities of the new engine that will power the next generation combat aircraft, as part of the Franco-German Future Combat Air System (FCAS).

The aircraft will enter into service by 2040 to complement the current generation of Eurofighter and Rafale fighter aircraft.

Both partners are willing to ensure a strong and effective management of the program, and to supply the Forces with their longstanding experience in military engines,

In the frame of this partnership, Safran Aircraft Engines will take the lead in engine design and integration, and MTU Aero Engines will take the lead in engine services. MTU Aero Engines will be in charge of the low and high-pressure compressors and the low-pressure turbine, while Safran will be responsible for combustor, high-pressure turbine and the afterburner. The existing joint venture Aerospace Embedded Solutions1 (AES) will be in charge of the engine control hardware and software under the responsibility and the lead of Engine integrator (Safran Aircraft Engines). The intention is to achieve a balanced French–German industry program share, assuming balanced funding by France and Germany.

"Through this collaboration which represents a step forward, we manifest that Safran is going to play a leading role in the construction of a European defense industry,” said Philippe Petitcolin, CEO of Safran. “By teaming up with MTU Aero Engines, we will combine our respective areas of expertise according to the “best athlete” principle, while also generating strong synergies to foster innovation”, added Olivier Andriès, CEO of Safran Aircraft Engines. “Safran has proven its ability to fully develop, produce and support military aircraft engines over the last six decades”.

“This program represents a milestone for European sovereignty in military engine technology,” said Reiner Winkler, CEO of MTU Aero Engines. “Safran Aircraft Engines and MTU Aero Engines are natural partners for this French-German collaboration. Both companies have specific experience in developing fighter engines, along with a history of partnership reaching back over 50 years.” Michael Schreyögg, Chief Program Officer of MTU Aero Engines, added: “Along with Safran Aircraft Engines, and based on our technological know-how, we feel that we are fully capable of delivering a state-of-the-art propulsion system. The key to success will be starting a technology and demonstrator program by mid-year.”

Safran is an international high-technology group, operating in the aircraft propulsion and equipment, space and defense markets. Safran has a global presence, with more than 91,000. Safran is listed on the Euronext Paris stock exchange, and is part of the CAC 40 and Euro Stoxx 50 indices.